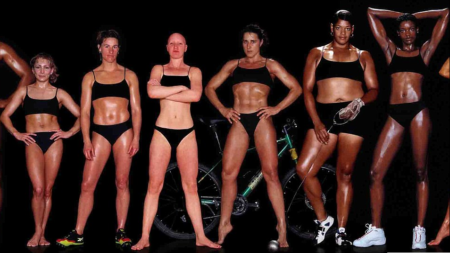 With the Olympics upon us, it’s time to discuss body image.

Photographer Howard Schatz’s publication titled Athlete was released in 2002, demonstrating that the typical athletic build is not always defined as long limbs, lean muscle mass and low body fat percentage. These athletes were photographed at the peak of their sport back when the book was released, demonstrating various heights, shapes and sizes required to be an Olympic champion.

Audiences have had their eyes glued to TV sets around the world over these two weeks as we celebrate diversity through competitive sport. No editing, touch ups or hair and makeup teams required in this television program – every bead of sweat and stumble will be aired live as we watch the power that is the human body perform skills that many of us find unimaginable as we cosy up on the couch in our trackies and uggs.

However, as these athletes strive for perfection in the four years leading up to their big moment, many face the pressure of body image whilst training for gold, in particular, the women.

Australian swimmer Leisel Jones is known as one of our most successful Olympians, holding the record for the most medals alongside fellow swimmer Ian Thorpe. Yet Jones, now retired, has spoken out in the past about the criticism she faced at London 2012 when her highly impressive achievements were overshadowed by the criticism of one photograph taken poolside of Jones in her swimsuit, which the media went as far as to include online polling for readers as to whether she was fit enough to compete.

Jones has since gone on to pen her tell all book titled Body Lengths, divulging the ins and outs of her swimming career and the body image taunts she experienced during those years. In it includes the secret language of coaches discussing the girl’s appearances, the fallout of her friendship with Olympic champion Stephanie Rice over her backstabbing remarks about Jones’ eating habits and performance in the pool, and the effects that dieting has had on her life.

Similarly, American gymnast Shawn Johnson faced body image scrutiny at the peak of her career. At the age of 16, she competed in Beijing 2008 and won a silver medal. In the documentary, I am Second, Johnson spoke about how the defining moment was overshadowed with feelings of failure.

“I remember being given the silver medal on the podium; the person who did it gave me a hug and told me, ‘I’m sorry’. Being given a silver medal at the Olympic Games and being told I’m sorry was kind of like a validation in my heart that I had failed”.

Post Beijing, she competed in the US series of Dancing with the Stars, where she was dragged through the media on her appearance; her 4’11” muscular frame was compared to her taller, leaner female colleagues. As she approached London 2012 trials, the continuous criticism was taking its toll – she struggled with sleep and was losing her hair. It was at that point that Johnson made the decision that the pressure wasn’t worth it and announced her retirement.

Going back to Schatz’s work, one of the main observations noticed when interviewing these athletes for his series was the difference in gender approach to their athletic careers. Many of the women discussed how they had to put off having children until they were past their athletic prime. The men, however, did not have this same predicament. This to me raises concern – if these female athletes are pushing themselves to be their best in sport, what toll is it taking on their bodies for later on in life?

The International Olympic Committee promotes positive body image through their website, in particular, towards their female competitors. Known as the “female athlete triad”, the three areas of concern that female athletes face when competing are:

The IOC promotes female athletes to seek help if they display any of these three symptoms.

The Olympics is the one moment in history where we are accepting of our athletes, flaws and all. We are reminded every four years that there is no single look to an athlete that achieves gold and that healthy can be envisioned in all shapes and forms. Regardless of gender, sexuality, race or religion, it’s about achieving greatness at any capacity. It’s a moment for creating heroes and feel good stories – think of Nur Suryani Mohamed Taibi who competed for Malaysia at London 2012 in the air rifle event whilst 35 weeks pregnant (one of two pregnant women to ever compete at the Olympics). And who could forget Eric the Eel at Sydney 2000, the 100 metre freestyler came last in his heat, setting a record for the fastest time in the history of Equatorial Guinea.

Schatz’s images are a good reminder to all of us that whatever shape we are, we are capable of doing anything. In this case, you do not need to be lean and toned to make an Olympic athlete. Skill overrides physique in this arena, and this too should translate to everyday life.

If you are struggling with your body image, contact us at BodyMatters.