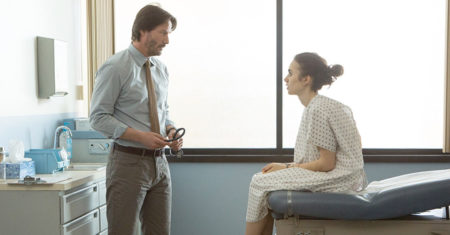 Last week Netflix released a trailer for a film, ‘To the Bone.’ Even though the film is not yet available for viewing, the trailer has drawn a lot of criticism. So much so that a petition has been started to have the film’s content reviewed by professionals to minimise potential harm. It recently follows another controversial show released by Netflix 13 Reasons Why.

To The Bone follows Ellen (Lily Collins), a young woman experiencing anorexia. The storyline appears to hit every stereotype with regards to eating disorders. Ellen is a young Caucasian female from a supportive, resourceful and wealthy family. Predictably, Ellen is treated by a quirky doctor (Keanu Reeves), whose primarily role seems to be offering comedic relief. Unfortunately, in reality not everyone has the luxury of such support and the film appears to romanticise the experience of an eating disorder.

The trailer features vivid images of calorie counting, exercising in secret, cutting foods into tiny pieces and lots of protruding bones. To add to these strong images, uplifting music is played and phrases such as “I am healthy” and “I am in control” in bright colours are displayed. All of these things together over-simplify the illness and undermine the difficulty in overcoming anorexia.

While it may appear to be an uplifting story, for those that are vulnerable, such influences can be very damaging. A contagion effect is well documented in research – eating disordered behaviours often learned through popular culture (such as TV shows and role models), friends and the Internet. For those at risk of developing or currently experiencing an eating disorder, this film is likely to be triggering and exacerbate unhealthy behaviours.

Sarah McMahon, co-founder of BodyMatters Australasia, believes the Netflix film “could offer a unique opportunity to shed insight into a life threatening mental illness and access a population group that requires more education.” However, she fears that it won’t do so. “Previews give us every reason to believe it will result in mass contagion”.

“When it comes to triggers, To The Bone hits the trifecta: the inclusion of graphic images, numbers and unhelpful phrases, which could trigger, glamorise and trivialise anorexia” (Sarah McMahon).

Another troubling issue is that lead actress Lily Collins has a history of eating disorders and had to lose weight for this role. BodyMatters psychologist Rebecca Guzelian is concerned that although “it has been reported that she did this under the guidance of nutritionists to ‘preserve her recovery,’ I wonder how realistic this actually is. Not to mention the potential medical complications of intentionally losing that significant amount of weight.”

“I think that this somewhat minimises eating disorders. Would cancer sufferers willingly put themselves at risk of getting cancer again for a movie role? Given that eating disorders have an extremely high mortality rate I think this level of risk is really dangerous and somewhat contradicts any benefit of making the movie” (Rebecca Guzelian).

Anorexia is a serious illness with very real health risks that can be life threatening and recovery can be a very long and distressing process. The incidence of eating disorders has greatly increased in recent years and I fear that any glorification or romanticising is likely to increase the problem.

If you or anyone you know are wondering whether or not to watch, I would seriously consider how susceptible you are to these sorts of images. I would recommend against watching it if you feel that it may be in any way triggering.

If you or anyone you know needs help with eating or body image issues, please contact us to arrange an appointment with one of our experienced psychologists.