We all worked out years ago that it’s a hard thing to keep up with the Kardashian’s. With their multiple mansions, lavish cars, private jets, clothing and beauty collections, modelling contracts, and phone apps, us “normal people” earn less in a lifetime compared to what they earn in one Kardashian campaign. What started out as Kim being solely in the spotlight has now shifted further down the line to the Jenner’s girls as they enter into young adulthood. In particular, the world watched on as the youngest of the “Klan”, Kylie, turned 18 last year and became a legal adult, which in Kardashian terms means, moving in to a $2.7 million mansion and getting a Ferrari from your boyfriend.

King Kylie, as she is now known, has risen to her own level of fame and individuality, with her ever changing beauty and style, red carpet appearances and 37 million Instagram followers. She has even rivalled big sister Kim’s popularity, having beaten her with her number one selling app. But have you ever noticed that Kylie never features a “throwback Thursday” (or #TBT as it’s referred to in the insta world) shot of her younger teenage self? Could it be that she’s hiding from the insecurities that was once her natural face? 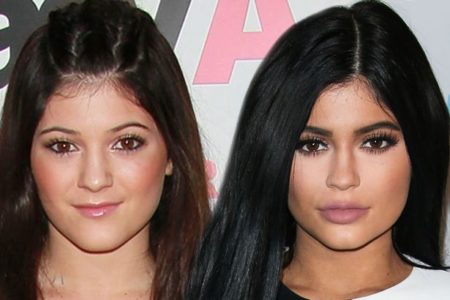 Speculation first arose back in 2014 that Kylie had plumped her lips, to which she responded via Twitter that the rumours “hurt my feelings and to be honest are kinda insulting. Just in case you forgot, I’m 16”. She continued to play the game of neither confirm or deny for some time, overlooking her changing appearance to her growing up and her ever expanding glam squad teaching her make up tricks. This lead to the online trend known as #KylieJennerChallenge, the free and DIY version of lip enhancement where you suck the air out of a shot glass to achieve plump, bigger lips – a non-invasive and cheap option, but the results were not as one hoped. 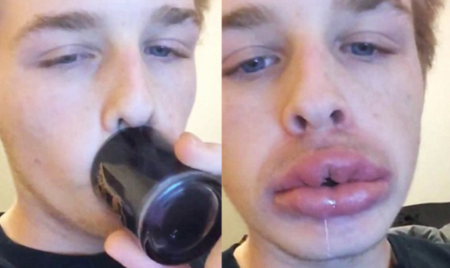 The not so glamorous effects of the Kylie Jenner Lip Challenge.

In May 2015, viewers watched on as Kylie finally admitted on KUWTK to having work done. “I have temporary lip fillers, it’s just an insecurity of mine and it’s what I wanted to do”. The flow on effect – approximately 68,000 women in the US between the ages of 20-29 had lip fillers in 2015 according to the American Society for Plastic Surgeons. Coincidence?

On top of the lips, it has been speculated that Kylie’s cosmetic work has included a chin enhancement, eye brow lift, fillers and a nose job. In fact, Kylie’s face nowadays more closely resembles her older sister Kim’s then that of her younger self.

Left: Kylie now versus then, Right: Kim versus Kylie now.

Now that Kylie is of legal age, her image has shifted from commercial to rapper girlfriend and sex symbol. Her Instagram posts focus more on her showcasing her body parts in skimpy swimwear and couture gowns then her intellect, and somehow, the image is working – her hair extensions and lip kit lines are selling out online, giving her a reported net worth of $5 million.

Now that Kylie is of legal age, her image has shifted from commercial to rapper girlfriend and sex symbol. Her Instagram posts focus more on her showcasing her body parts in skimpy swimwear and couture gowns than her intellect, and somehow, the image is working – her hair extensions and lip kit lines are selling out online, giving her a reported net worth of $5 million. 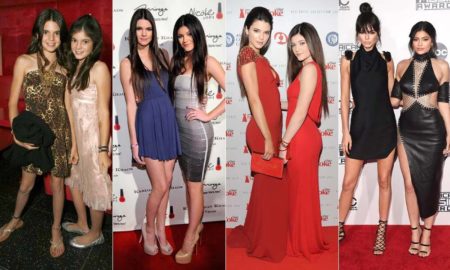 The evolution of Kylie Jenner’s style (along with sister Kendall).

So what’s Kylie’s image teaching the everyday teenage girl? Well for starters, her beauty is not representative of an 18 year old girl, nor attainable. Jenner’s mindset is to instantaneously fix anything she doesn’t like by throwing money at it, either through her make up team or surgeon. She’s setting the bar for teens to enter into cosmetic surgery at an even younger age than before, and they are listening. In 2014, over 224,000 teens aged between 13-19 years engaged in cosmetic surgery in the States, an increase of two percent since the previous year (American Society of Plastic Surgeons, 2015). Gone are the days where girls went to school wearing a bit of cover up on a pimple. It’s all about contouring now, and with the influence of Kylie and her team, you too can shrink the size of your nose and define your cheeks in a matter of minutes.

Her over sexualisation through social media is also encouraging girls to act beyond their years. With boyfriend Tyga on her arm since the age of 16, their seven year age gap was the focus of tabloids until she turned 18, with articles written about Jenner’s momager Kris consenting to sleep overs and couple vacations. Whether there is truth to these stories or not, it’s influencing girls to make decisions about relationships and sexual experiences that they may not be prepared for.

Overall, girls have got it hard enough comparing themselves to others without the Kylie Jenner’s of the world blasting their Instagram feed. What they need to learn about is the attainable and to focus on their abilities and intellect rather than what they look like on the outside. BodyMatters Australasia can help clients and their families with body image advice through the following services: