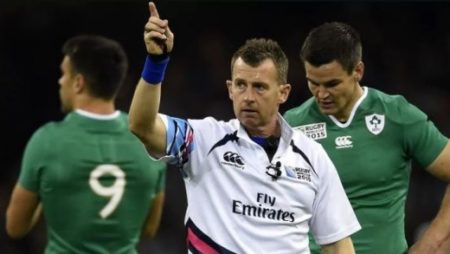 A rugby union referee, Nigel Owens, is trying to breakdown the stereotypes surrounding eating disorders. Owens is highly respected and was given the honour of officiating the Rugby World Cup final in 2015, the pinnacle for any referee. He is also well known for his charisma and wit and once famously told a player that ‘this is not soccer’.

Owens recently publicly acknowledged that he has been experiencing an eating disorder for almost three decades in a BBC documentary ‘Panorama: Men, Boys & Eating Disorders.’  Owens suffers from bulimia and has been purposefully making himself sick since his teens, when he was grappling with his sexuality. Owens grew up in a small town in Wales and had nobody that he could talk to about the thoughts and feelings he was experiencing.

“There is a fear that men can’t show signs of weakness and it is embarrassing to admit that something is wrong,“ Owens says. “We are supposed to be strong. But what I realise now is it is actually a great sign of strength to be able to confide to a friend, colleague, doctor or family member.”

Despite never seeking treatment, he was briefly able to stop his vomiting when his mother was diagnosed with terminal cancer. He explains: “I thought, here is my mum fighting every day to spend more time with us, with an illness that she can’t do anything about, and here I am with an illness I can stop.” However, his bulimia behaviours reemerged prior to the 2015 Rugby World Cup due to the pressure of needing to pass fitness tests.

The documentary provides an insight into the experiences of boys and men, from teenagers to professional athletes, living with an eating disorder in the UK. It highlights the importance of seeking help early to not allow the eating disorder to take too deep a hold. However, the UK system does not allow for quick access to treatment. In Australia, we are very fortunate to have access to great quality care that anyone can access relatively quickly to prevent an eating disorder of taking too tight a grip.

Owens hopes that by coming forward it may encourage other men to seek help. Eating disorders, like any mental health condition, are not something to be ashamed of but require prompt and adequate care for best possible outcomes and improved quality of life.

If you believe that yourself, or someone you care about is experiencing an eating disorder, contact the Butterfly Foundation on 1800 33 46 73 or BodyMatters Australasia on (02) 9908 3833 or info@bodymatters.com.au.

If you would like to watch the documentary it can be found here.