It’s ironic to be talking about this subject when one of Lady Gaga’s greatest hits is Born This Way, the 2011 anthem about accepting yourself for who you are. We all know the lyrics and the underlying meaning of her anthem, so why is it that online trolls have taken to social media to thrash one of the greatest performers of this generation over her appearance?

Gaga (legally Stefani Germanotta) took to the stage of the 51st Super Bowl halftime show, possibly the biggest platform for music performances each year, to sing a compilation of her greatest hits. What was an outstanding performance collaborating her talents of singing, piano, dance routines and aerial acrobatics, was soon overshadowed as online trolls took to social media to body shame the singer and actor. Comments on her appearance in her costumes, including names such as “dough belly” were quickly refuted by her “Little Monsters” who follow Gaga’s mantra of accepting yourself for who you are. 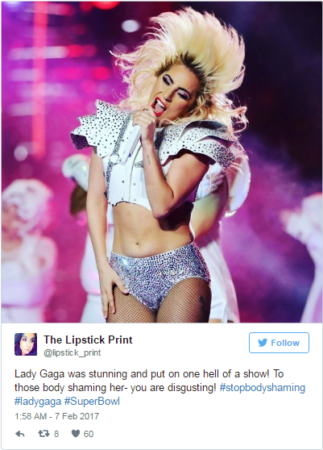 One of the many defenders of Lady Gaga’s performance (Source: Twitter)

Whilst we all know of tall poppy syndrome, it’s sad to think that these trolls have taken aim at someone who has vocalised her vulnerabilities in the past. In 2014, Gaga spoke with Harper’s Bizarre about her battle with eating disorders and depression since the age of 15.

“Depression doesn’t take away your talents – it just makes them harder to find. But I always find it. I learned that my sadness never destroyed what was great about me…You just have to go back to that greatness, find that one little light that’s left. I’m lucky I found one little glimmer stored away.”

Gaga took to social media during that time to discuss the struggles she has dealt with both pre and post fame. Her message to her fans being to love themselves at any size.

“Proud at any size, because the inside is what really counts. Plus, it’s all how you pose! Just ask the supermodels!”

Going back to her Super Bowl appearance – let’s strip Gaga of the fact that she is the recipient to six Grammy awards, a golden globe award, a frequenter of the Forbes World’s Most Powerful Women list, as well as advocate for the LGBT community and her Born This Way Foundation, and philanthropist. Let’s focus on her as Stefani, the young woman who at the vulnerable and impressionable age of 15 developed an eating disorder.

Fast forward 15 years of mental health hurdles, constant criticism from the media, management and herself, and she’s gotten up in front of millions in an outfit that, let’s be honest, a lot of us would not dare to wear in public (including, most likely, the trolls that commented on her appearance during the weekend’s performance). She’s flogged through a lot of rehearsal hours with rigorous dance routines to perfect her craft, and she’s not going to show any of the trolls that she’s given one iota about their nasty words and heinous comments over her decision to don sparkly hot pants and a football inspired crop top all in the name of entertainment.

The moral of the story is, ladies and gentlemen, Gaga is pushing the boundaries so that we mere mortals can be more accepting of ourselves, flaws and all. No matter what size or shape, Gaga is here to help teach us that we are all normal, beautiful and born this way!